This question came up amazingly often during my first week in Tanzania, and I always answered with momentary silence followed by a stupid, awkward laugh. I reflected on this as I spent a good chunk of one early morning evacuating the contents of my bowels into a fairly functional flush toilet in a two-room canvas tent smack in the middle of the Serengeti, a chorus of wildebeest grunts accentuating each uncomfortable heave. Despite my digestive discomfort, there was a hot water bottle nestled in my bed, a plush bathrobe draped on a hook, and I was about thirty minutes away from having a French press full of steaming coffee delivered straight to my front flap. Here, I was rich – or at least rich-adjacent.

It felt sort of weird, this idea of being viewed as wealthy. I felt a complex swirl of guilt and defensiveness, tempered by the reminder that when I asked why there were going to be so many porters on my upcoming Kilimanjaro expedition, the answer was, “Everybody in Tanzania needs a job!” Halfway across the world, I was an eternally unzipped wallet. The Bank of Shawnté. A walking, talking dollar sign.

Except for at the moment, I wasn’t doing any walking or any talking – I was hunched over a cold toilet, groaning to myself, realizing the limits of my intestinal flora. I suddenly remembered the seemingly overzealous suggestion that I avoid all produce for my first few days in the country and immediately made a mental tally of the massive amount of vegetables I ingested in the name of hunger and in the hope of avoiding unidentifiable meat products.

After some time, I reluctantly left my perch, packed my things, and staggered over to the Land Rover for one last game drive back to the airstrip. Once we touched down in Arusha, I bid adieu to my safari mates Debbie and Dan, then made a mad dash for the bathroom, where I was confronted with The Most Terrifying Thing given my current physical state: 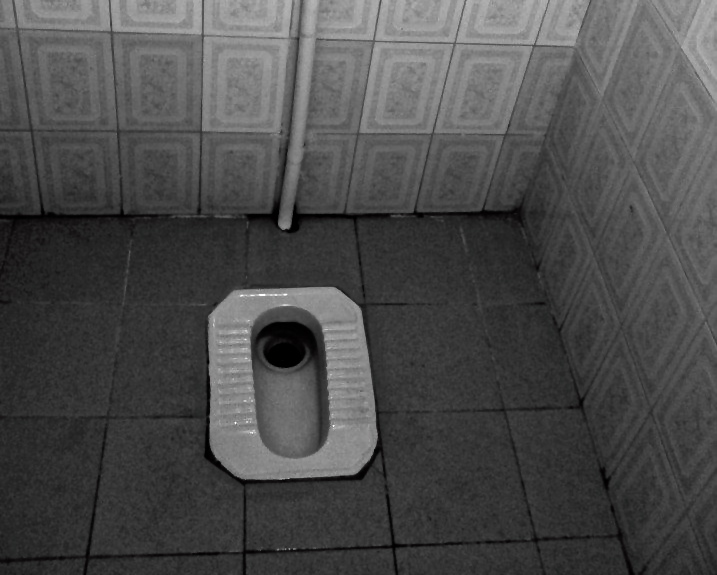 Also known as a pit or squat toilet, this is basically a hole in the ground over which one hovers to do their business. Once you’re finished, you shake and spray – there’s usually a hose stashed in the corner of the room – or if you were brilliant enough to think ahead, use toilet paper that you smuggled in, then trudge the used bits out to a nearby waste basket for deposit.

Here at the airport, the setup was only vaguely civilized – cracked, wet tile and the stench of a thousand soiled diapers. Every square inch was wet with water or urine or some unidentifiable liquid other. I practiced squatting in various positions with my purse slung across my chest and my duffle balanced on my thighs, but upon realizing that I had no toilet paper and that the morning’s business was as yet unfinished, decided to wait for the clean porcelain familiarity of my sparkling hotel commode.

Waiting for me at the airport was a kind, quiet guy named Nico, a driver employed by the company I’d be trekking with on Kilimanjaro in the coming week. I was glad for his comfortable silence, a rarity so far in my chatty Tanzanian travels, because it allowed me not only to focus on clenching tight every inch of my war-torn digestive system, but also to think about all of the questions I’d been peppered with over the past few days. My drivers were all men, from my first airport pickup to my safari guides to Nico here, and their inquisitions were nearly identical:

Why did you come to Tanzania?

Do you believe in God?

Do you have children?

Are you traveling alone?

Intrusive and awkward? Sure. Malicious and judgmental? Not at all.

I came to Tanzania, I usually explained, because I’ve heard that the people are wonderful, the scenery is marvelous, the animals are magnificent, and because I want to climb Mt. Kilimanjaro.

I want to…well, I want to have an experience.

That last part sounds ridiculous, so in truth, I never said that out loud. Dear sir, I spent a Tanzanian lifetime’s worth of cold, hard, crisp, unwrinkled American dollars so I could drink hot coffee in a fancy tent, shit in a flush toilet on the Serengeti, marvel at a multitude of horned beasts, and traipse up a giant volcano. I want to experience your exotic culture and eat your exotic food and take pictures of your exotic scenery. I want to get away from my regular life for just a little bit and have an Adventure.

Instead, I piled on frothy platitudes about the Wonders of Tanzania and waited patiently for the next question.

“Do I believe in God?” [Noting the rosary draped around the rearview mirror.] “Wellllll, I’m a very spiritual person.” [Glancing at the dalla dalla ahead, where Tupac’s disembodied head floats above a neon pink splash of “GOD LOVES YOU!”] “Very, very spiritual, really.”

Once the driver replied with the usual praising of Jesus, I was then hit with the one-two punch of “Where is your husband? Where are your children?” In as many words, I replied that I was a childless singleton and patiently awaited the flood of gently pity-filled questioning that followed. “Ohhhhh, why are you not married? Why don’t you have children? How old are you? Do you want a husband? Why do you travel alone?”

After hearing this round of questioning often enough during my trip, I settled on the belief that there’s some sort of government-mandated pamphlet issued to all drivers titled “How To Make Small Talk With American Women.” It was like a mobile version of Groundhog Day.

One morning late into my trip, I was in a van driven by a talkative man named Abdullah, headed towards the grassy shores of Lake Duluti for a canoe trip. When he asked if I was married, I blurted out, “Why does everyone keep asking me that question?” I mean, outside of family reunions, I’d never had so many people interested in my relationship status as I did in Tanzania.

Abdullah chuckled. “Well, because when we see a woman traveling alone and we find out that she is not married, we know that she is honest and brave, and we think she is a warrior to come to Tanzania by herself.”

Ohhhhhhhhhhh. I let loose a huge, strangely proud smile. I could be into this.

Not a half hour later, my canoe guide Emmanuel unsurprisingly drilled through the requisite conversational blitz and after I responded that I was unmarried and traveling alone, he grinned and exclaimed, “Ah, you are like a female Maasai warrior!” I wanted to high-five him in the most serious way, but considering we were about two feet away from a toothy monitor lizard the size of a small child, I thought I’d better keep both hands on my paddle.

In my glorious Wonder Woman haze, I was reminded of a conversation I had earlier with Victor, after I asked him if women ever became safari guides. He said that he only knew one female guide, and explained that women weren’t usually as tough physically as you needed to be in order to deal with the very real dangers on safari, especially considering the violent poachers that roamed the area. “African women just aren’t raised to want to be that way,” he shrugged. “In the Western world, especially in the United States, women are raised to be human beings, but here, they’re raised to be women.”

I realize how that might read, but Victor wasn’t judging me, or American women, or Tanzanian women, for that matter – he was just making an observation based on his life experience in contrast to that of the constant influx of tourists he meets, same as any of the other men I conversed with during my trip.

When they found out that I was traveling alone and planned to climb Kilimanjaro, I suddenly commanded a strange sense of respect from the local men. “Oh, you must be tough! You must be strong!” But was I stronger than the countless mothers and sisters and daughters I saw lining the dusty roads, packages piled on their heads and across their broad shoulders, the weight of the world hung from their eyes? Did these men look at them and think they were tough, they were strong?

I don’t know. I didn’t expect to be hit with a wave of feminism in the shadow of Kilimanjaro, but I would think about these things during my coming week on the mountain – my place as a female traveler, as a female “climber,” as a female no different, yet so very different than those who surrounded me at the moment.

Well, I would think about those things until I was preoccupied with other things, I should say – like gasping for air at 18,000 feet whilst clung to a volcanic outcropping, pants around my ankles, freely blessing the frigid flanks of Kilimanjaro with arcs of champagne-colored urine under a starlit sky.

Yes, sometimes there were other things on my mind.